Broken, Awkward, Incompetent, Mismatched Heroes: Why We Need Them in Stories 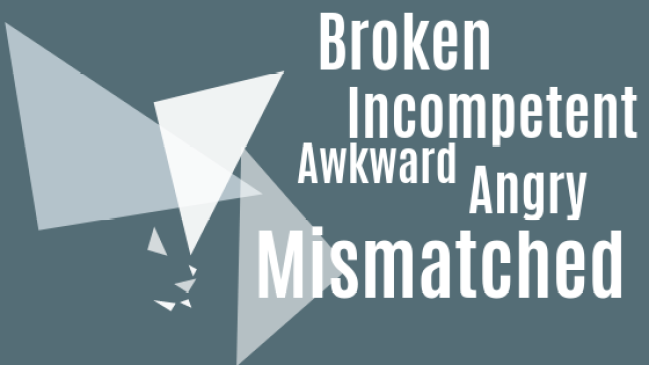 I’m not sure what the umbrella term for these types of characters should be. Atypical heroes? Messy heroes?

Well, whatever the term, I adore them. And my love grows stronger every time I come across a protagonist who’s graduated from the academy of perfect heroes. You know–the shiny put-together ones. The ones whose mistakes are just tiny blips in their character designed to further the plot.

My first issue with those characters is that I’m kind of bored of them. Selfish, I know. But I think I’ve seen and read enough of them to last me a lifetime.

My second issue (and probably the more pertinent of the two because it goes beyond “Well, I think it’s boring, so YOU should think it’s boring too!”) is that they spearhead the idea that the only way to be a hero in your story–to win the battles, collect the friendships, score the romance, change the world for the better–is to be confident, bold, determined, to always know what to say at the right times, and have an emergency stash of witty quips in your pockets.

And if you occasionally say the wrong things or step out in the wrong direction? Well, hey, no worries! They’re nothing permanent! Your weaknesses only exist as temporary obstacles to overcome so you can scratch another notch on your Badass Post.

But what about the rest of us?

Because there are many faces to heroism and not all of them involve being extroverted or confident or even necessarily good. Maybe they’re a hero who has crippling shyness and social anxiety. Maybe they’re just not super into the idea of quests and adventures. Maybe they’re trying so hard to be perfect and unflappable that it’s breaking them from the inside out.

So some quick bullet points on why I love these characters and why I want to see more of them:

Now let’s look at some of the specific character types and examples of them in media!

A story starring an incompetent hero doesn’t have to be a comedy of errors. Nor does it mean they should stay incompetent from beginning to end.

For me, it means being thrust into a position the character is wholly unprepared for and every step from there on is a hard, awkward learning process riddled with stumbling blocks and many steps backwards. And maybe it takes them a little longer to pick up on certain skills–things like politicking and swordplay don’t come overnight (or overweek or overmonth). Side characters may even have to help prop them up until they can stand on their own. And just as in real life, there’s nothing shameful about that.

Sansa Stark from ASoIAF/GoT is the biggest example that comes to mind: a sheltered girl who likes pretty boys and the lure of the city and is very good at embroidery. A girl who’s thrown into a pit of vipers and tries her best to learn and survive.

Sansa has also unwittingly become the biggest example of the issue surrounding people’s response to these fish-out-of-water characters, usually the female ones–that they’re annoying and useless and whiny and “Why doesn’t she do x and y and z?” and “Arya is SO much better.” (On the flip side, if they’re “too competent” they’re called Mary Sues. Female characters just can’t catch a fucking break, can they?)

A character who’s bad at something doesn’t make them a bad character. It makes them normal. Relatable. Human. And while a quiet story about learning and survival may not be as a exciting for people as one with swordfights, it’s nonetheless a journey of courage and strength.

I find it interesting (read: frustrating) that WW2 fiction nowadays are often filled with fish-out-of-water heroes and readers gobble them up, and yet when it comes to speculative fiction–fantasy and scifi, especially–people have so little patience for them. Which kind of makes sense–different readership, different expectations–but also not at all, because shouldn’t we expect more incompetent characters in a world that demands that they win wars, fight/befriend dragons, and juggle fire balls all at the same time?

I see the “I’m FINE” trait more often with side characters than main ones which is kind of a shame. The fun thing about these characters is that from the outside they resemble your typical heroes: proactive, capable, and confident. But peel back some layers and you start to see cracks, which then resolve into chasms.

These are characters who try so damn hard to project an aura of okayness, both to themselves and to others, that they can’t tell where the pretense ends and where their real feelings begin.

Karin Lowachee does this beautifully with Jos Musey in Warchild, as does Seth Dickinson with the indelible Baru Fisher in Baru Cormorant. And if you want non-speculative stories (because heroes can exist outside of SFF settings), Neil Josten in All for the Games series is another great example. This part got LONG so I cut some of it out and will probably make a separate post on it at some point. But here’s the gist: we need more fictional characters who fuck up. It’s especially important nowadays when social media has us privy to every morsel of success your friends and family and random strangers have achieved. The amount of pressure that’s placed on young people to get the perfect grades, get accepted into this and that college, get ‘x’ number of degrees by the age ‘y’ is ridiculous and makes you feel like there’s zero room for mistakes. Either you walk that tightrope from end to end or you crash and burn. There’s no in-between. And seeing more of these kinds of heroes in media might have saved me an ambulance bill.

And people can say that’s giving fiction too much credit, but here’s the thing: art doesn’t exist in a vacuum. It’s a product of our world and it, in turn, feeds back into the world as a reflection of the things we want to see more of. And if we see more characters in books and movies and games who genuinely mess up and are made stronger for it, then that’s kind of an invitation to ourselves to be less fearful and more forgiving of our failures.

And I honestly believe that can save lives.

Some wonderful examples of these characters include Millie Roper from The Arcadia Project series, who I would give my left arm for, and Mae Borowski from the game  Night in the Woods. She’s a pansexual college-dropout with depression, and I would happily give my other arm for her. 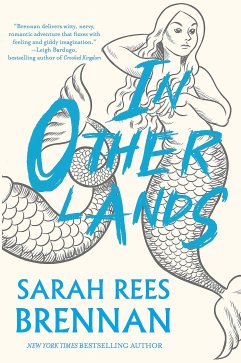 Eliot of In Other Lands is unlike any other protagonist I’ve come across in YA fantasy. To be blunt, he starts out as a kind of a little shithead: he’s prickly and awkward, says the wrong things at the wrong times, makes the worst first impressions and consistently gets on people’s nerves. But it works because it doesn’t come from a place of “I’m doing this because I’m an asshole and want to fuck with people,” but rather, “I’m terrible with social interactions and I feel out of place in this world.”

And how beautiful and necessary is it to see a teenage hero who’s not all that nice?

These characters tell you that it’s okay that you don’t know what to say or how to act in certain situations. You’ll step on the wrong feet and piss people off and that’s fine because that’s life and you’ll learn from it (hopefully).

And seeing that kind of sentiment in media is such a weight off your back, you know? Especially when you’re young and still trying to figure yourself out.

Murderbot from The Murderbot Diaries

People adore this series and for good reason. Personally it doesn’t do much new in terms of plot and worldbuilding (from what I’ve read so far anyway. I still have two books to go), but character-wise it’s everything. Because the story is all about murderbot, and murderbot would much rather spend its time alone watching dramas than interacting with a group of people. I mean, come on–an awkward, introverted protagonist in scifi? And an A.I. at that??

Why isn’t that more of a thing in fiction?

“Save the World? Sorry, I Can’t. I Have to Wash My Hair” Hero

So, I have this weird attraction to the scenario of characters being offered the role of a  hero or Chosen One or whatever, and them responding with, “Thanks but no thanks” because they feel that there are more important things to worry about. Like, take some penniless college student trying to juggle six classes per semester along with a part-time job, and then one day a Chosen One Messenger bursts through their door yelling, “Guess what, Harry? Yer a–”

“Chosen One. Yeah, I know. And what’s the monthly salary on that?”

“Er, well. You’ll earn satisfaction in the knowledge that your actions will herald the salvation of– “

“This isn’t an optional–“

“Plus, I’m not really Chosen One material, you know? I mean, the other day I dropped my Starbucks cup on the way to chem class and didn’t even bother to pick it up. I don’t think you want a litterer as the poster child for your quest, do you?”

“Try the guy next door. He volunteers at the animal shelter or something so he’s, like, literally saving puppies and kittens in his spare time. There’s your Chosen One.”

…Ahem. Sorry, I got carried away.

But yes, reluctant heroes! Heroes who, for whatever reason–maybe because they’re afraid of fighting, maybe they’re super busy and this whole quest business is incredibly disruptive to their livelihood, maybe they just really like sleeping in during the weekends–aren’t all that enthused about their new role.

I love them because they’re relatable and cathartic and exude Tired Millennial energy. And sometimes I feel like there’s an unspoken rule that SFF heroes need to be eager adrenaline junkies and glory hounds. And those are great! They’re fun! But not everyone wants to risk their lives to save the world. Not everyone wants to be kings and queens and politicians and insert themselves into every major event that shakes up a nation. Some people just want to live their lives peacefully in relative comfort, and there’s nothing wrong with that.

Jalan from the Red Queen’s War series is a great example of how such a character can be done well. At the start of the story, his life basically boils down to gorgeous women, good food, comfortable bed, and …that’s…about it. That’s the height of his aspiration. Well, until he gets dragged into a war against his will. Then he adds “Don’t die” to the list.

While Jalan grows as a person over the course of the series, he still remains true to who he is, in that he’s not going to be leading nations and giving inspirational speeches anytime soon. Yet he’s still, against all odds, a hero.

And I find that super endearing.

And there you go! What are your thoughts on these characters? Send me all your juicy, juicy thoughts!