Review: Alice Isn’t Dead (A Novel) – A Road Trip Like No Other 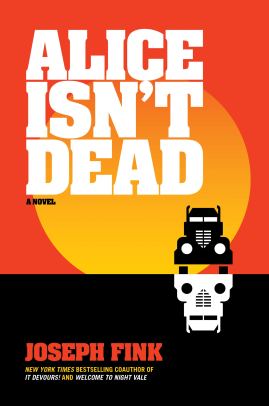 Keisha Taylor lived a quiet life with her wife, Alice, until the day that Alice disappeared. After months of searching, presuming she was dead, Keisha held a funeral, mourned, and gradually tried to get on with her life. But that was before Keisha started to see her wife, again and again, in the background of news reports from all over America. Alice isn’t dead, and she is showing up at every major tragedy and accident in the country.

Following a line of clues, Keisha takes a job as a long-haul truck driver and begins searching for Alice. She eventually stumbles on an otherworldly conflict being waged in the quiet corners of our nation’s highway system—uncovering a conspiracy that goes way beyond one missing woman.

For those who don’t know, the original Alice Isn’t Dead is a three-part narrative podcast created by Joseph Fink–one of the brains behind Welcome to Night Vale–that follows a truck driver named Keisha in her search for her not-dead wife. While Fink calls the novel a “complete reimagining,” the two are actually pretty much identical–same characters, same plot, same weirdness. The only main difference is that the novel is told in third person, losing the intimacy of the podcast but gaining extra details.

Alice Isn’t Dead is surreal horror (there’s people-eating non-people, government secrets, cryptic people being cryptic) with its atmosphere driven almost entirely by the U.S. landscape. I mean, road trips have something of a surreal and fantastical quality to them. Like the wall of billboards and power lines that seem to stretch on forever. Like the small abandoned towns you pass through at night and you swear you see something dark and unreal from the corner of your eye. Fink captures that feeling perfectly and with such brevity.

Fink has a very distinct writing voice that’s hard to describe. In short it’s weird. But it’s a comfortable kind of weird. You get the sense that he’s not saying these things for the sake of being weird, but because his mind occupies this space between the dream world and the waking world and he just needs to let it all out.

It’s also an inclusive kind of weird. The writing isn’t someone boasting about how deep and unique their imagination is, but an eager kid tugging at your hand and whispering, “Come on. I want to show you something.”

While Fink excels with the strange and the occult, I think his biggest strength lies in capturing the minute complexities of people and their relationships–in this case, that of a married couple. While the first half is focused on the mysteries of cross-country serial murders, the latter half is dedicated to Keisha and Alice and untangling the whole “you made me think you were dead” knot. It’s wonderful stuff.

I did find the structure of the story a little too rigid, though. One chapter corresponds to one episode, and so each chapter feels very self-contained and the transition between one to the next kind of choppy. It reads very much like a podcast-to-book adaptation, and if you’re looking for that, then great. I personally wanted something more loose and…novel-y.

(Oh, and go listen to the podcast)

Review copy provided by the publisher via Edelweiss. All opinions are my own.