Review: The Phoenix Empress (Their Bright Ascendancy 2) – Toppling into the Ashes 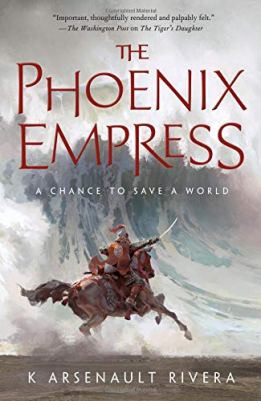 The Phoenix Empress picks up where The Tiger’s Daughter left off, with Shizuka and Shefali reunited after eight years apart. Shefali returns to find Shizuka crowned empress and drowning herself in alcohol, while Shefali herself is dealing with demons of her own (quite literally) and the fact that she is dying.

So, despite some issues with The Tiger’s Daughter, I did quite like the relationship between the two main characters; while over-dramatic at times, I’d found it romantic and addictive for the most part. The Phoenix Empress, however…well, I think the best thing I can say about it is that it’s prettily written.

First of all, much of its first half is devoted to telling the readers what will happen later on in the story–a lot of coy promises that fall along the lines of “this and such exciting things happened to these two characters during the eight years…but we’re not there yet, so you’ll just have to wait for the details!” It took much of the anticipation out of the story and I found myself penduluming between frustration and boredom.

The other problem I had was with the structure. Whereas book 1 was a straightforward epistolary with brief interludes in between, this one goes back and forth between the present, with Shefali and Shizuka reunited, and the past, which recounts Shizuka joining a temple and becoming the general of an army. This all sounds fine on paper, but then you quickly realize that the structure doesn’t allow for any kind of meaningful and continuous character development.

Eight years is a very long gap in a relationship and it’s a long time for friction to build up–friction that doesn’t really get explored in this book. Just when I thought something interesting was building between the two women–something more than “You’re the love of my life”–the narrative jumped back into the past, and when it moved into the present again, all the previous tension dissipated. They love each other, which is great, but the relationship doesn’t move beyond that. I can shrug and overlook that in a 200-page romance novel, but in a 500+ epic fantasy–one in a four-part series, no less–I want something more complex and substantial.

Also, about a third of the way through, I finally figured out what’s been nagging at me about the tone of the writing: it feels culturally arrogant. The empire uses 32 honorifics; the brushstrokes of your calligraphy must be crisp and the scent of the paper perfect; the colour of the cord that you use to tie the scrolls must vary from recipient to recipient. It’s all so overly grandiose. I don’t want to say “fetishize”, but it is a level of glorification that goes into weirdly zealous depths. It’s like reading about a college exchange student who spent three months in East Asia, came back, and anointed themselves an expert on the cultures. And it’s not unlike the feeling I get when I’m being lectured to by a guy on a subject I’m already familiar with. Or listening to someone who feels the need to explain, in painstaking (and sometimes false) detail, the ins-and-outs of Korean culture just because they’re a fan of K-pop and K-dramas.

Moreover, the rest of the story felt very shallow. The side characters are present but underdeveloped;  Shefali and Shizuka get touted as gods but the story doesn’t really go into the details of how or why; and the ending I can only describe as underwhelming. Small spoiler (but not really because the book spoils it for you at the beginning): the latter part of the book sees Shizuka dethroning her uncle and ascending as Empress, but it occurs with such ridiculous ease and any political ramifications and–most infuriatingly–any lasting effects of Hokkaro’s imperialism are brushed over. And setting a story in an imperialist nation (based on a real-life imperialist nation) without addressing the deplorable nature of imperialism itself feels like a highly irresponsible decision.

Really, I’m beginning to realize that this series is very much Shefali and Shizuka Versus the World. At the core of the tale is their all-consuming love and every other story element–side characters, magic system, worldbuilding, cultural representation–gets sacrificed at the altar of it. Which makes for a validating F/F story, but not much of anything else.

Kathy @ Pages Below the Vaulted Sky

Scifi/Fantasy Scenes I Can Never Get Enough Of

Five Reasons Why You Need to Read Desdemona...

Review: Nevernight – Nevermore Will I Give into...

Monday Chatter: A Birthday of a Sort (And...

Series Review: The Wode – THIS is How...

Great review! I’ve had my eyes on this series for a while so I’ll keep this is mind when I read them. Would you say you liked the first one better?

Thank you! And oh I definitely liked the first one better! The characters’ relationship is very soul mate-y, which might turn some people off, but I found the narration is super engaging and addicting. 🙂

Thoughtful review, Kathy! You get kudos for finishing the book and providing a balanced review because it sounds like it had several problems. I hope your next book has all of the things you absolutely love! ♥️

Thanks, Jennifer! I always get anxious about publishing negative reviews for ARCs and being too harsh on the book, so I’m glad it came across as balanced!

Really great review here. I bought the first one a while ago but it’s still in my TBR pile. I think I’ll probably still pick it up at some point, but I’ll have to keep all this in mind when I get to book two. 🙂

Such a shame it wasn’t more. I have the first book still to read, but the tepid reviews have made me put it off and it hasn’t helped that people aren’t crazy about this sequel either. Gah, the covers are beautiful though!

[…] ‘The Phoenix Empress’ by Kathy at Pages Below the Vaulted Sky […]

[…] The Phoenix Empress (Their Bright Ascendancy 2) by K. Arsenault Rivera ⚔️🌈: Yeah, this was not a good one. The cultural issues aside, I found the pacing to be glacial, the character development lacking, and worldbuilding more or less nonexistent. [Review] […]