I was recently nominated by Andy for the One Lovely Blog Award, so thank you, Andy! Andy runs a blog about LGBTQ books and writing tips. He’s also working on a YA novel so be sure to check him out so you can say “Hey! I know that person!” when he becomes a superstar author! 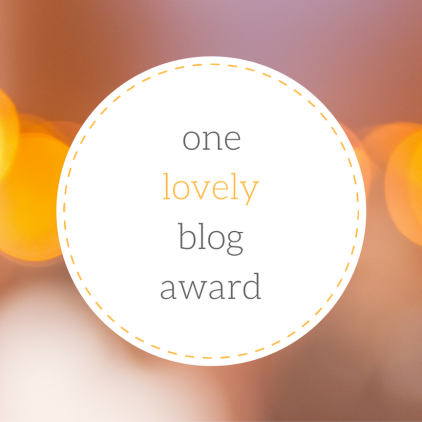 SEVEN FACTS ABOUT ME:

1) I was a seriously gullible kid. The first time I ever flew on a plane was when I was seven and immigrating to Canada with my family. My dad had the bright idea to inform me that every passenger was required to parachute out of the plane when they reach their destination. I’d stared at him wide-eyed, bouncing between excitement and trepidation, and asked if kids and parents were allowed to parachute together. He said that he’ll ask one of the flight attendants. Then, when we got close to landing, he was like, “Oh, it’s raining! No parachuting for us today, I’m afraid.” I don’t know if I was more relieved or disappointed. Add a hundred more stories like this and you basically have a summary of my childhood.

2) I’m pretty scatterbrained, which can be a bit of an inconvenience when you’re in a science field. I lose stuff all the time. I barged into random people’s rooms constantly, when I was living in dorm, thinking they were mine. And I get hopelessly lost downtown if I don’t have my nose perpetually glued to a map.

3) I hate apple pies. Especially hot apple pies. There’s just something about the taste of warm mushy apples combined with cinnamon and sugar and butter that makes me nauseated.

4) I wanted to be a voice actor when I was in my teens (and still kind of do, to be honest).  I would play classic RPGs and yammer at the computer screen during all the dialogue bits. I adored Shakespearean read-alongs during English class. Even now, I love reading books aloud and doing all the different voices. My favourites are the angsty, emotional scenes (because of course). Hamlet’s soliloquies? Nailed them.

5) I had a massive fear of people in full-body cartoon suits as a kid. More so than clowns. Clowns are fine! Clowns are great. Clowns make balloon animals! Clowns have eyes that blink and facial expressions that change. Not like those 7 ft tall, perpetually smiling monstrosities that lumber up to you with open arms like they’re about to whisk you away to FUNland, where we’ll have so much FUN, with no need to EVER return home, and there’s definitely no murdering of small children going on, haha!

Disneyland? More like Horrorland. And watching Donnie Darko did NOT improve my opinion of them. (I do apologize to any costumer-wearing peeps I’ve ever encountered who were traumatized by me pointing, wailing and sprinting away)

6) I’m a certified lifeguard. I love swimming. But you plop me into any body of opaque water where I can’t touch the bottom, and I will panic and thrash around like a fish in a barrel. So if you ever meet me and decide you want to take me swimming in a lake or an ocean, expect to be used as a human bodyboard.

7) Anime! Love them. I pretty much grew up with them because 80% of the kid shows they aired back in Korea were anime. Except they were dubbed over so I didn’t know they were Japanese shows back then–they were just really great cartoons. Some of my favourites were Slayers, Digimon, Slam Dunk, Cardcaptor Sakura, and Case Closed (and yeah, some of these probably aren’t really suitable for a 5-8 year-old).

NOMINATIONS:
– Book In Her Eyes (Sionna)
– Alex Reads and Blogs
– Acquadimore Books
– The Bookworm Daydreamer
– A Court of Crowns and Quills
– A Science Girl in a Fantasy World
– Strangely Pop Cultured
– Amiie’s Books

(You are not required to do a post on this, so don’t feel pressured!)

[Review] From Unseen Fire – When in Rome…Do as the Mages Do?

How Historical Fiction Became a Source of Comfort...

Crawling Out of Cave Hiatus: What I’ve Been...

Top Ten Tuesday: Books that Took Me Out...

So I love disney world and taking pics with characters, but there is totally something weird about the way you can’t talk to them and it’s super awkward. Lol! And Donny Darko was my FAVORITE movie in high school. My friends were really worried about me 😂😂😂

Omg I totally agree about the awkward bit! Nowadays I’m less likely to run away from them and more inclined to want to rip their head off so I can actually SEE their face. Disney magic is wasted on me. 😂😂

I’m a bit scatterbrained – I blame the apple pies – which I love! Hahah
Lynn 😀

Apple pie haters land is such a lonely, barren place. 😂

I agree on apple pies – it’s not just the taste, which I don’t like anyway, but they feel… wrong? Something about the texture.
And thanks for nominating me!

Yes! It’s that weird, not-quite apple sauce texture! And you are literally the only other person I know who doesn’t like them.

I love Hamlet’s angsty emotional soliloquies too! I’ll have to disagree with u about apple pie tho lol

I am literally the only apple pie hater I know! All my friends think I’m crazy!

Thanks for the nom, love!

[…] surprised to discover I was nominated to the One Lovely Blog Award! I was nominated by Kathy at Pages Below the Vaulted Sky, a truly wonderful blogger with a fantastic blog. Thank you so much for the […]

[…] was nominated by Kathy at Pages Below the Vaulted Sky for the One Lovely Blog Award. Thank you, Kathy! I’ve been loving Kathy’s book reviews, […]